Always watch where you step

It worries me how some folk can't tell the difference between malarkey and molasses.

Even as a youngster I learned to avoid stepping in fresh piles of malarkey, but people today seem to enjoy rolling all over in it.

Don't they know that malarkey by any other name still smells like bullshit?

My old grandfather would say, "A man who wallows in enough malarkey never realizes he should take a bath."

at February 22, 2016 No comments:
Email ThisBlogThis!Share to TwitterShare to FacebookShare to Pinterest
Labels: My Two Cents

She Said, He Said: Leftovers 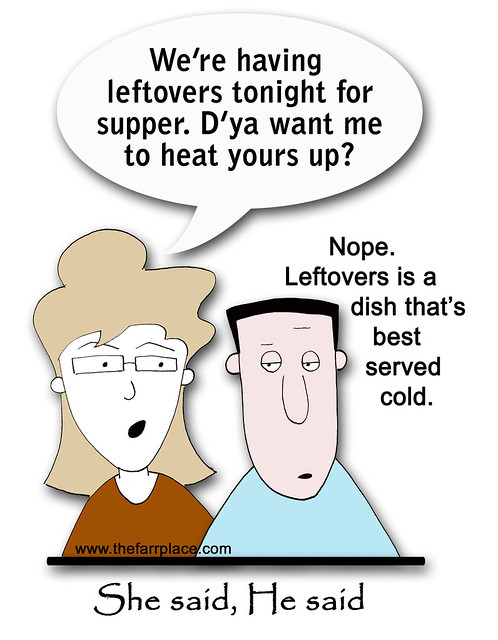 at February 18, 2016 No comments:
Email ThisBlogThis!Share to TwitterShare to FacebookShare to Pinterest
Labels: Cartoons

Back in the Saddle Again

After a two-month hiatus, I'm back to riding my motorcycle again.

My downfall was that I bought a truck.

A nice used one to get me through the Winter.

But every time I hopped into it to get me to work, I felt lousy.

I went 11 years riding through winters, and here I was being seduced by a bit of warm air.

Oh, some mornings I got up and told myself this was the day I was getting back on the bike, but then I found some excuse not to ride, so I drove.

at February 16, 2016 No comments:
Email ThisBlogThis!Share to TwitterShare to FacebookShare to Pinterest
Labels: Motorcycling

I never mix politics and pancakes 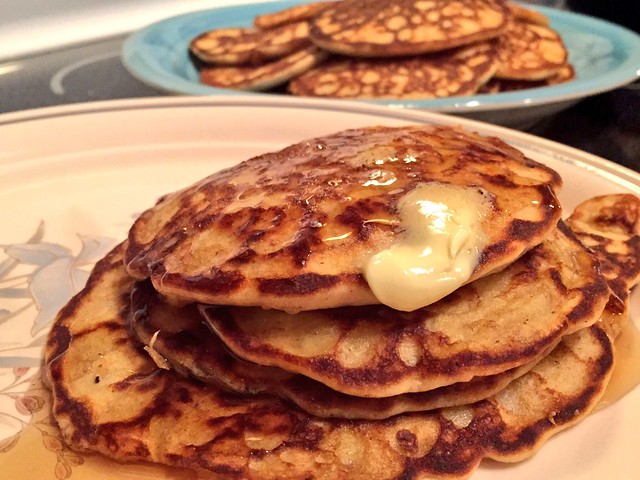 at February 15, 2016 No comments:
Email ThisBlogThis!Share to TwitterShare to FacebookShare to Pinterest
Labels: Photography

If roses were brown
and sugar was peppery,
love would still prevail.
at February 14, 2016 No comments:
Email ThisBlogThis!Share to TwitterShare to FacebookShare to Pinterest
Labels: Poetry n' Stuff

My thoughts about leftovers

The other day on Twitter (@thetexashoss), I got a bee in my bonnet about leftovers, and people who won't have anything to do with them, and fired out the following nonsense:

I was brought up to believe you never really know a person until you eat leftovers with them.

You raise your kids on hard work and leftovers and they just might turn out OK.

I never throw out leftover cornbread. Well, I might if it gets a bit purple and fuzzy, but only maybe.

If a restaurant is too posh to give you a to-go box, then you shouldn't have been there in the first place.

I do have a confession: I shy away from leftover oatmeal that's been in the fridge for a week.

If you ain't ingenious enough to make Thanksgiving leftovers last for at least a week, then you just weren't raised right.

A political candidate who thumbs his or her nose at eating leftover lasagna can't possible have my best interests at heart.

A candidate who wouldn't save a half-eaten Subway sandwich for a midnight snack or tomorrow's breakfast is too shortsighted, in my humble opinion.

I want a president who looks at a leftover Sunday pot of chili and sees lunch for Monday, and "Hey, there's even enough for the VP."

My old grandpa would warn us, "A man who'll eat tonight's beans but shun tomorrow's refried beans will more'n likely steal your cattle."

at February 13, 2016 No comments:
Email ThisBlogThis!Share to TwitterShare to FacebookShare to Pinterest
Labels: My Two Cents

My old grandfather would always say... 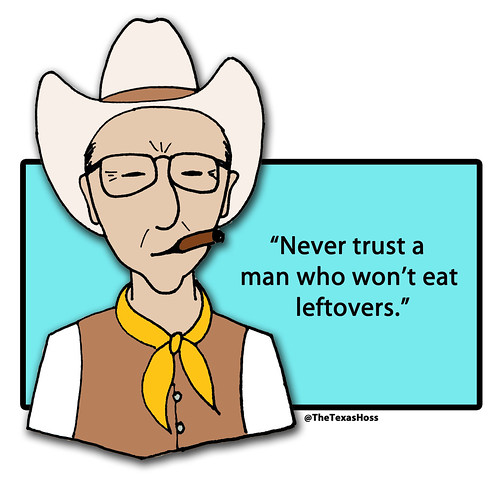