Okay, so who let Prince Albert out of his can?

C'mon, when you heard the news and saw the photographs, you were thinking the same thing I was -- how did "the beast" attract that beauty? 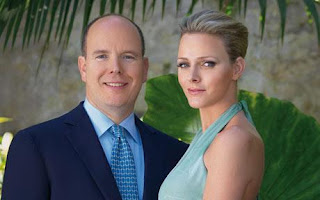 From what I hear in the news, long-time bachelor Prince Albert of Monaco is giving up the single life to marry South African and former olympian CharleneWittstock. She's 32 and he's 52. She was an olympic swimmer, and he was on the bobsled team. She is model gorgeous. He looks like a balding history teacher.

And once again we're left to wonder, "Why do really ugly guys end up with drop-dead beautiful women?"

With that in mind, I went searching across the interwebs for the answer -- and here's what I found:

Curt Smith, Relationship Coorespondent at http://www.askmen.com/, says: "Over the years, U-men [ugly men] have developed two kinds of strategies to date beautiful women. The first strategy is called Scouting For Beauty, and involves looking for undiscovered, up-and-coming beautiful women. The second strategy is called Impressing the Beauty, and involves impressing a beautiful woman who has no boyfriend and is sick of all the head games played by G-men [good looking men]. All she wants is an honest, trustworthy, fun man who can bring stability into her life."

Okay, so HE says it has nothing to do with money or being royalty, but I'd rather have a second opinion.

Over at http://www.loveshack.org/ (I think it's a community forum about relationships, but I'm not sure. I didn't stick around very long), some guy named Teddi had the following theory about the matter:

"Blokes are in a club and see a sexy girl alone at the bar. Boke One tells his mate "**** me would i shag that!" and his mate replies "oh yeah!" but they dont do nothing about it cos they dont like rejection, especially in front of their mates. However, come 5 to 2, they pick a '5 to 2' bird as at this point they are too drunk to care. On the other hand, you have ugly bloke, used to being picked on and rejected etc, so what can he lose? Ugly bloke approaches sexy girl and asks if he can buy her a drink. Now here is the twist! Sexy girl can not believe that someone actually likes her!!! So of course she will let this bloke buy her a drink!!! and as this bloke doesn't love himself, he treats her right!!!!"

What I think this Teddi bloke is trying to say is -- well, I'm not sure, but I'm sure HE does.

Somehow I ended up at http://www.gamespot.com/, which is not a relationship site, but someone asked the following question in one of their forums: "Can a semi-ugly, ugly, or really ugly guy have a girlfriend who is pretty??"

A forum participant named Hallenbeck77 (I think I prefer Teddi) gave this answer: "Yes it has, and can happen. In some cases, money helps, but in others, there are girls out there who realize that some ugly guys will try harder, be more faithful, caring, and understanding than any pretty boys out there. Plus, as a cosmic joke, some ugly people are...shall we say, "more blessed" in certain aspects in life than others."

I hope Hallenbeck is talking about being blessed with "humor" because this is a Rated PG-13 site, and I wouldn't want anybody to imagine anything more graphic!

So, after all this almost scientific research, I've come to the following conclussion for why hottie Charlene would want to marry frumpy Albert:

Charlene, who hasn't dated a bloke since kindergarten and couldn't believe that someone liked her, decided it was better to marry a balding but faithful man with a "huge sense of humor" than a gorgeous specimen of manhood who would spend more time in front of the mirror than she would.

Besides, he's a prince!
at June 26, 2010
Email ThisBlogThis!Share to TwitterShare to FacebookShare to Pinterest
Labels: My Two Cents