I am NOT a Vegetarian Texas Cowboy Foodie Blogger, Part II

It's my wife's fault.

They took advantage of me wanting to cook, brought home a bucket of vegetables one day, announced, "We want to eat healthier from now on," and that was that.

What was so bad about Friday pizza and movie night with breadsticks and 2-litre bottles of Coca Cola?

Was there anything wrong with Saturday hamburgers out on the grill?

How bad could a half a gallon of French Vanilla Ice Cream every week truly be?

But now, after two years of fixing and eating healthy vegetarian meals, I don't even salivate as I walk past the bacon section at Wal-Mart. It just makes me want to cry.

So, you wanna see a photo of my haggless? (meatless haggis) 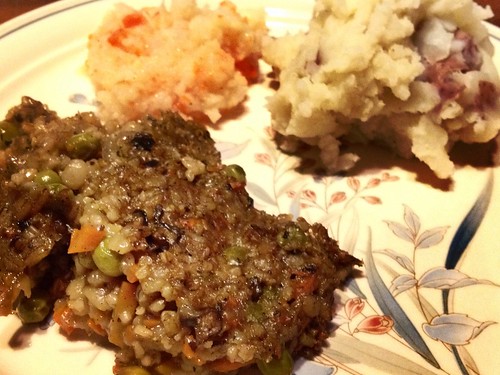 And it weren't half bad.
at February 11, 2015
Email ThisBlogThis!Share to TwitterShare to FacebookShare to Pinterest
Labels: My Two Cents, Photography