A chance encounter at a gas station in Arizona

I met Lance in Kayenta, Arizona. I was standing under a shade tree eating snack crackers and drinking water (my lunch for the day).

Lance was probably a little older than me.

He was wearing a baseball hat.

I only saw one tooth.

We talked about the bike, my trip, the heat, how far aways was Flagstaff; and then, like I expected, he asked me for two dollars.

Old Me held up my water bottle and said I'd spent all the money I had on this one bottle.

Lance said he understood and began to walk away.

New Me, knowing that a lot of people gave to me so I could get to Arizona, probably just to meet Lance under a shade tree, said that I might have two dollars if he'd sign my bike.

Lance signed my bike, and I gave him the money.

We shook hands, and before he walked away he said, "It was nice doing business with you." 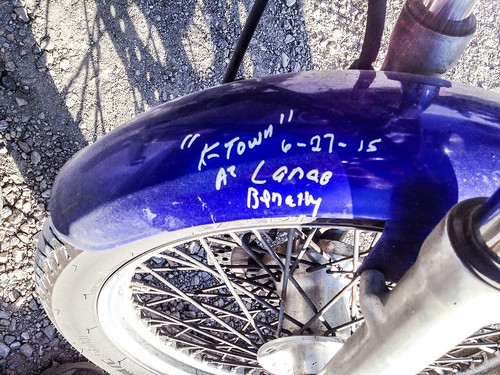 at June 29, 2015
Email ThisBlogThis!Share to TwitterShare to FacebookShare to Pinterest
Labels: Chasing America