What's in a name?

After more than 37 minutes of extensive research last Thursday, I've come to realize that I hate Thursdays, extensive research and if given a choice, would much rather jump on my dear old JD and ride him around the backyard in the middle of the night during a spring lightning storm.

JD is my riding lawnmower.

I named it JD because it’s a John Deere. I could have named it Alice, but jumping on an Alice and whipping it around the backyard in the middle of the night just didn’t seem appropriate.

But now that I think about it, jumping on JD doesn't sound all that good, either.

Oh well. We humans are a strange lot; spending all our money on diets and exercise machines, eating fast food when slow food is so much better, and giving human names to inanimate objects because we’d much rather have “Cindy” helping us trim the hedges than some smelly old weedeater.

Well, let me tell you what I think of the whole mess:

(Bollocks is a Middle English word meaning “testicles,” often used figuratively by the British as a noun to mean “nonsense.” Sentence: “Naming a lawnmower JD is a bunch of bollocks.” Which it is, and I didn’t. I lied.)

I can go along with naming a dog "Rover" or “Skip” because they’re living creatures that can be trained to fetch or play dead. But giving a Black and Decker Citrus Juicer with an Easy-Pour Spout the name of "Bob" or “Luanne” is just asking for trouble.

Sure, Willie Nelson had his "Trigger"; B.B. King played his "Lucille." There’s "Herbie" the Love Bug; Stephen King's "Christine"; The Green Hornet’s "Black Beauty"; and of course The Batmobile.

But let me be perfectly clear about something: I will NOT give my “things” a name.

And that includes naming my motorcycle.

I know I'm bucking the trend of modern-day motorcycle adventurers, but two wheels, an engine and an exhaust system doesn't deserve (in my humble opinion) an affectionate name like “Madeline” or “Southern Belle” – a name that it will learn to hate as it grows older, wishing that it was named "Apollo" or "Sidewinder."

You spend days and days trying to find just the perfect name for your bike, looking through all the “A Million and One Great Baby Motorcycle Names” help books you can find, and what do you get in return? A self-absorbed chrome-covered machine that never misses a chance to criticize your decision with, "Why couldn't Mad Dog Barganski be me owner. He gave his bike a COOL name" or "Someday I'm going to change my name to something that YOU should have named me in the first place."

You, in turn, respond with, "When you get a bit older and you’re living by yourself in some dusty spare-parts corner of some two-bit motorcycle and ATV shop, you can name yourself anything you want."

How can something you’ve spent time and energy and money and polishing rags on be so cruel, you ask yourself? Where did I go wrong? I tried to be a loving, supportive motorcycle owner, putting in the premium fuel while all the other owners pump the low-grade junk fuel into their machines.

He should be grateful that I gave him a name at all. Has even thought about all the poor motorcycles in China who never even get a name? How they live on the streets, uncovered, watching their resell value plummet without even knowing they HAD a resell value?

“One day, when you’re older, you’ll thank me for your name and the time I put into giving it to you,” you say.

"I will not! I hate you,” your ungrateful little cruiser screams. “I wish you never bought me."

Oh, the foul language that bubbles up to your lips, just wanting to be set free, but you refrain because you’re a good motorcycle owner, you’ve read all the expert books about having a bike, you know that what is said in the heat of the moment will come back to bite you in the buttocks threefold – so you just grin and bear it, because that’s all you can do.

Notice, I said YOU.

The raw emotions of naming a motorcycle are just too much for me to handle. 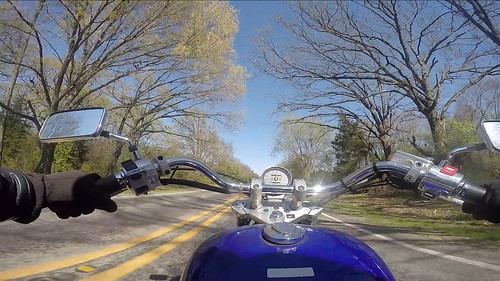 at June 02, 2015
Email ThisBlogThis!Share to TwitterShare to FacebookShare to Pinterest
Labels: Chasing America, My Two Cents