"How do you feel about lane splitting?" asked Robert.

Lane splitting is one of those controversial motorcycle techniques you never tell your wife about.

The technique involves riding between the lanes of slower-moving vehicles, hoping they'll stay in their lane while you go through theirs. It's sort of like making your own little HOV lane but with cars and eminent danger on both sides.

And it's controversial because in most states -- like Texas -- it's illegal.

"I always feel iffy about it too, but in California it's legal," said Robert. "And if we don't, we're going to be in this traffic all day."

Up ahead of us were two very long lanes of cars at a dead stop. Road construction? Accident? We didn't know. All we knew was that we had many miles to go, and just sitting there wasn't helping.

I met Robert Magill from the United Kingdom earlier in the day at a scenic vista overlooking the ocean. I was taking photographs and he pulled up just behind me.

(For motorcyclists, that's equivalent to "how's the weather?")

Robert was retired, he was a bit taller than me, had more hair than me, was more ruggedly handsome than me, so I left my helmet on.

Turns out Robert was in the U.S. on an eight-week holiday to ride around the States and Canada, and had bought the Kawasaki Versys he was riding because it was cheaper than shipping his own bike over.

We talked about what we were doing, where we were going, he asked me to take his photograph with the ocean as a backdrop, I asked him to sign my bike.

And then he was off.

About an hour later we met again at a gas station, and since we were both heading in the same direction -- toward San Francisco and the Golden Gate Bridge -- we decided to ride together.

And eventually split a few lanes together.

But please don't tell my wife. 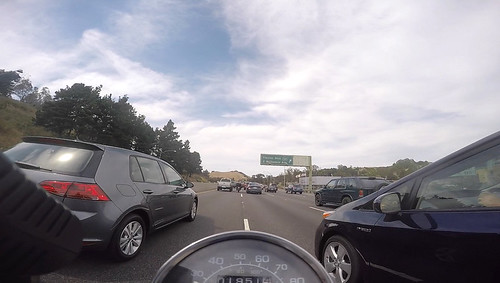