How I Spent My Summer Vacation

I called my little trip Chasing America because I guess that's what I was doing -- chasing down all the goodness this country has to offer, grabbing it by the collar, and dragging it home with me so I could share it with my friends and neighbors.

I hope I was successful.

(Here's a link to the photos I took. Chasing America)

My longest ride was 770 miles on 22 June. I rode from Mount Pleasant to El Paso.

My shortest ride was 104 miles on 21 July. I rode from New Jersey, through New York City, to Port Jefferson on Long Island.

I traveled through 43 states.

I saw all five of the Great Lakes.

I put my feet in the Pacific and Atlantic Oceans.

I ate salmon in Oregon, aligator in Florida, and lobster in Maine.

I didn't get sick at all.

I dropped my bike once in Two Harbors, Minnesota. I was on a parking lot. My engine was off. My kickstand was up. I felt stupid.

I never had a flat tire or ran out of fuel.

I lost numerous amounts of water bottles, a rain jacket, my wife's "Mark Said It Would" umbrella, and 10 pounds.

I got hit in the head by a bird. I was wearing a helmet. The bird died. (Moral: birds should always wear helmets when they fly.)

I never saw a moose in New Hampshire.

I never saw a bear in Pennsylvania.

Nobody tried to kill me in Amsterdam, New York.

I met wonderful people all over America.

I only recall one person being rude. I was talking to "the newlyweds," he was in a big pickup truck, he had an external PA system, he told us to move along. That was it. One slightly brusque encounter.

Here's the map of my entire route: 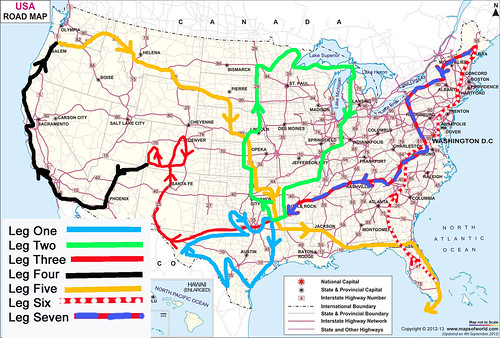 Would I do this all again?