Triathlon Day without me 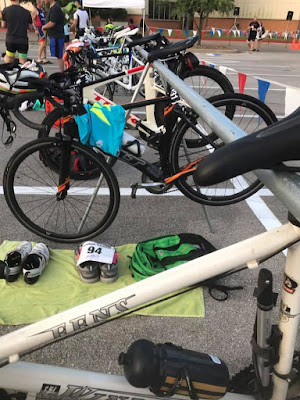 It's 6:10 a.m. on a Sunday morning. I should be eating a piece of toast with peanut butter and washing it down with a large glass of water.

I should be putting on my trisuit and checking my sports bag to make sure I have everything I need -- helmet, shoes, socks, sunglasses, towel, swim goggles, race belt.

I should be looking over my bicycle to make sure the race numbers are attached properly and that nothing has been knocked amiss, like stuck brakes or a whopper jawed seat.

I should be jumping up and down with excitement, my heart beating as fast as if I was actually participating in the Triathlon that is set to start in less than two hours.

I'm at home with a squid-like heart monitor hanging from my neck, it's tentacle wire leads attached to my chest with suction cups, and I have this feeling that at any moment it's going to rip me apart and start to feed.

Over dramatic? Well, maybe a bit.

Thirty-two weeks of training for a Sprint Triathlon down the toilet just because my body decided to "act out" like a teenager who's been caught skipping class with his girlfriend, Rita, but "we didn't do anything, really, we just went to the lake and skipped stones and drank a few beers, it's nothing to get all upset about, everybody does it, just chill."

Last Sunday, after my wife and I got home from watching a movie, I discovered I had lost the peripheral vision in my right eye. To be looking straight ahead and not being able to see my right hand in front of my face was a really weird sensation. And then, when I tried to ask my wife where the ibuprofen was, the words coming out of my mouth came out in a different order than I had intended.

The whole episode lasted less than 20 minutes, but I spent the next two nights in the hospital.

I'm home now, of course. I've been home since Tuesday. But since spending two nights in the hospital is equivalent to spending two weeks in the hospital, I decided on Wednesday morning that doing a Triathlon at the end of the week -- today, Sunday -- was a bit more than I wanted to handle.

So, Wednesday morning I went for a 1.8 mile walk around the block. Oh, it felt so good to get out and stretch my legs.

Thursday I went to the gym and spent an hour on the treadmill.

Saturday I went to our local wellness center and swam a bit.

And Sunday, today, I'll probably rest awhile, wash some dishes, and get ready to go back to work after a short but eventful spring break.

Thirty-two weeks of training down the toilet? Well, not really.

I feel better than I have in years.

And I'll be ready for the next triathlon that happens in May.

at March 18, 2018
Email ThisBlogThis!Share to TwitterShare to FacebookShare to Pinterest
Labels: A View From a Farr