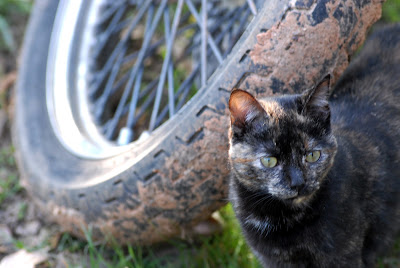 Cats are forever hungry, always begging for more and more; they cry to be let out to chase lizards, birds and other things, then eat them while you’re watching, right in front of your very front door.

And what does the lucky lizard think as it limps away without tail? “Oh, it could have been much worse, let me say; he was ferociously hairy, but I got away. And what a great story I forever will tell.”

Then the cat comes back inside, begging as if it had not eaten a thing in a week. And what do we do? We give him a treat, just to tide him over until meal time, nothing more. And the cat repays us for his full tummy by barfing it all up – lizard tail and all – all over the living room floor.

Does the cat show any kind of shame or remorse? Of course not. It purrs and purrs its peaceful cat song. He mesmerizes us into believing he’s the king of the house – which isn’t quite right and definitely not wrong.

“Why do we have three cats?” I enquire while the culprit feigns innocence and scratches his head.

I actually prefer cats, it’s hard to believe. They fend for themselves, chase mice on occasion, and warn you whenever a snake is around by standing as still as a concrete cat statue – leaving you to wonder what they’ve found on the ground. A turtle, a lizard or possibly a cricket? A butterfly, maybe, or some little frog. But a snake? “Oh, come on now. Really? That thing would be long dead if you’d been a dog.”

I once wrote a poem about a cat. It went something like this: There's a cat by my feet who thinks feeding is all I'm good for. / That and opening doors. / She bumps me with her head as if to say, “Hey, attend to me, here.” / Why? Because I'm the only one near. / But let it be known I don’t “hop to” the very moment she demands attention. / I let the cat cry for a second or two before I jump up to feed her / because / “I am the master of my fate. I am the captain of my soul.”

(I submitted the poem to several literary publications that would certainly love it, or so I thought; but for some cryptic and mystic mysterious motive, my magnificent masterpiece has never been bought.)

I don’t know why a cat inspires poetical feelings to come over a man who really has no business writing poetry at all. Maybe it’s the way cats always land on their feet when something unexpected happens and they meet with a fall. Or jump up on the kitchen counter, which to them, is four times as tall.

A long time ago my pets counted turtles, a rabbit, a hedgehog and even a mouse. Of course we had dogs, but never a bird (though, I always wanted one inside of the house). But today, off all days, in a world tight with tension, the last thing we need is one more tit for tat. So, let’s leave it at this, your pet may be awesome, but for all of its faults, I’ll stick with cat.

at March 04, 2018
Email ThisBlogThis!Share to TwitterShare to FacebookShare to Pinterest