Growing up in the Age of Pong

I don’t know if life was much easier during the “Pong” dynasty, but it certainly seems like it was, now that I’m looking back at it through the cloudy pink mist of years.

I guess I was in junior high during that time. The early 70s. A time when every mall arcade worth its weight in quarters had Skee-Ball lanes and pinball machines. You’d make a high score, get rewarded with rolls of coupons, then trade in those coupons for anything from neon-colored pencils to silly-stuffed animals.

“Skee-Ball or pinball. Pinball or Skee-Ball. That’s your choice. Only cost you a quarter. Ah, too bad. Maybe you’ll do better next time. Win the big prize. Impress the girl. It’ll only cost you another quarter.”

And then a couple of years later, things seemed to change practically overnight. There was Pac-Man, and Space Invaders, and Donkey Kong, and my personal all-time favorite – Asteroids. So many games to play; not enough pocket change. “But dear father, lead me no longer into the temptation of pinball. Better yet, push me into the valley of outer-space to fly a little wedge of a ship bent on destroying two-dimensional space rocks floating on a screen of black; for thine is the kingdom, and your hard-earned quarters given to me because I begged them of you are the glory, forever and ever, Yee-Haw!” 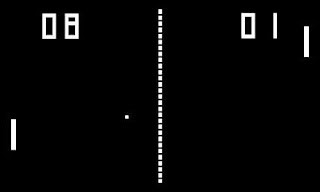 And then came the first and absolute king of home gaming – Pong, by Atari.

I was at a high school band party the first time I ever played Pong. I think there was a swimming pool; there may have been some snacks; I vaguely remember music over a home stereo system. But the biggest impression on me was the Atari home console that contained Pong. Its components were black. The wires seemed like tentacles from an alien squid. Somehow it plugged itself into the television set. Somehow, we manipulated a couple of vertical “paddles,” raising them and lowering them on the screen. Somehow a digital ball was passed back and forth between the paddles. And somehow, we all waited our turn to play the winner without falling into a riotous digital feeding frenzy. And it was the best party ever.

Growing up, I never had a home gaming console. I guess it was just too expensive. “So much money for to do what? Play games? Go outside and play. You have a bicycle, don’t you?” But every trip to the local mall included me forgoing looking for new clothes in favor of me spending my fair share of my parents’ quarters at the mall arcade, and I was as happy as could be.

I’ve been thinking about Pong and Asteroids and Space Invaders lately, wondering if it’s possible to recreate those carefree days during these trying times; wondering if I can poke my head into some reincarnations of games long past as a temporary cure-all for what ails me. And since it’s cheaper than buying liquor, I’m sure my better half would half-way approve.

at October 01, 2021
Email ThisBlogThis!Share to TwitterShare to FacebookShare to Pinterest