A letter to my youngest son

Will you please explain to me why you're in France, doing all the Frenchy kind of things that French people do, and you did NOT take me along with you? Yeah, sure, you have a French class, but still that's no excuse for leaving home without me. 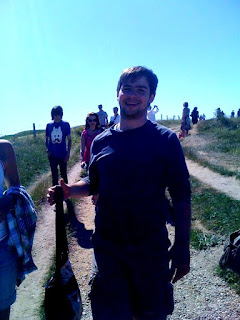 I mean, I could have carried your baggage, I could have documented your every move, I could have spent some time drinking wine and eating cheese while you were in class. But no. You're there, I'm here; you're eating French cuisine, I'm eating frozen taquitos; you're speaking French, I'm still learning how to communicate in English -- and it's just not fair!

Okay, I'll stop complaining now. I guess I wouldn't be much of a father if I begrudged you this opportunity to travel half way across the world and be in the company of some of the most beautiful women in the world. Speaking of, have you seen very many French women? They sound even sexier speaking French, don't they? Hey, could you send me a photo or two of some you run across? You know, say it's for your old man at home who doesn't get out much any more, and it would do his heart good to see buxom French babes as long as "the wife" doesn't see them. You could do that for me, couldn't ya?

Anyways, I suspect when you get home in a couple of weeks you're going to want to have wine with every meal. Breakfast, lunch and dinner. And maybe a cheese and wine snack before bedtime? I guess I'm okay with that. I don't care that much for wine, but I won't stop you. How old are you again?

Well, hope you're having a good time. Hope you enjoy Paris this weekend. I'm thinking about going to Paris, Texas, just so I can feel like I'm a little bit closer to you -- and all those French women. The stetson on top of the tower kind of ruins the effect, but I can handle it.

Again, hope you're having a good time, and thanks for all of the photographs.

P.S. I don't suppose you could bring me home a T-shirt? Just thought I'd ask.
at July 10, 2010
Email ThisBlogThis!Share to TwitterShare to FacebookShare to Pinterest
Labels: My Two Cents