So, the other night I had a bit of curry leftovers.

We always have leftovers.

It's not that my family hates my cooking so much that there's plenty still left in the pan. It's because I always cook to feed an army.

Anyways, we had some leftover curry from the night before, and since I didn't want to waste it, I incorporated it into a completely NEW dish.

Heat up some onions and green beans, spoon the leftovers into the skillet, pour in some vegetable broth, thicken it with some cornstarch, add a ton of mushrooms and halved cherry tomatoes, stir in some cooked Ramen noodles, and sprinkle the whole thing with cilantro...

...then (and this is the most important part) give it an exotic name.

As soon as I announced, "Supper is ready. We're having South Korean Mushroom Stew," mouths watered all around the house.

Well, that is until my wife looked at the skillet and said, "Hmmmm, this looks vaguely familiar. Is that the leftover curry I see?" 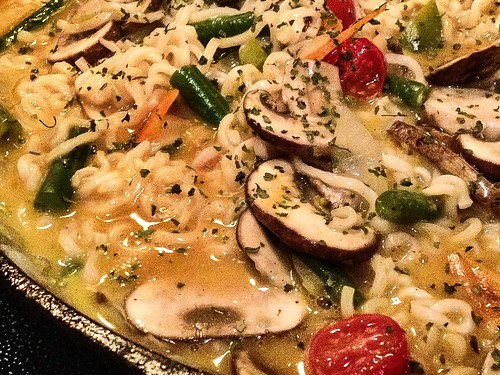 at February 24, 2015
Email ThisBlogThis!Share to TwitterShare to FacebookShare to Pinterest
Labels: My Two Cents