I've seen some spectacular sunrises on this trip across America.

Sunrise over the Davis Mountains.

A hint of sunrise behind the fog over the Pacific Ocean.

But today I witnessed a sunrise over I-10 in Florida's panhandle that was the highlight of my day.

Well, that and the brief chat I had with a Florida state trooper.

You see, I knew today was going to be a bust photo-wise because 10 and 95 are excruciatingly long and boring highways (I rode 451 miles over eight hours and took only two naps) that get you from one part of the state to the other without you even realizing that there's more to see than just highway, trees, thunderclouds, gas stations and Subway sandwiches.

I mean, if you were to ask me to describe Florida after what I saw today I'd say it was a trip odometer that barely moved forward, and sometimes, out of spite, ran backwards.

But none the less, I decided this morning to TRY and take a sunrise photo.

So I stopped on the shoulder, took several photos while ignoring the 18-wheelers buzzing past, and got back on my bike to continue on.

And that's when one of Florida's Best pulled up beside me.

"Everything cool?" he asked through his opened window.

He was a youngish trooper, round face, blond hair (I didn't get his name or badge number -- my inner reporter was slipping).

"Sure. I just stopped to take a picture," I said.

He looked down the highway and I knew exactly what he was thinking:

Take a picture of I-10? The Spanish Inquisition of all highways? The highway that makes perfectly-happy couples contemplate divorce twice for every hour they spend on the road because, "This is your fault we came this way too long to the next rest stop this car now or I'll pee all over my mother told me not to marry you better get us out of this God-forsaken state of mind to leave you now, buster, and I really mean it this time"?

Anyways, he just stopped to see if I was okay. I told him about the trip, he seemed quite impressed, and then...

He gave me a police escort back onto the highway with lights a-flashin' like I was some bloody Rock Star! 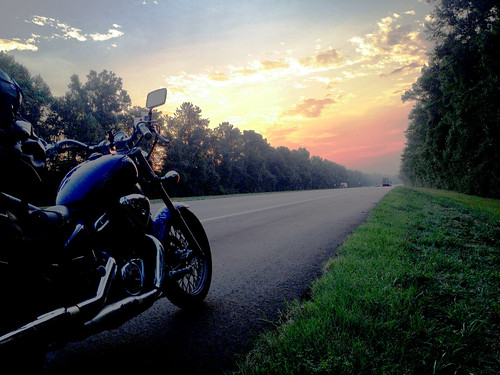