Go ahead and take your best shot

SHE SAID: It’s just a vaccination. A little old shot.

HE SAID: That’s what THEY say, but it’s really two. And who knows how many after that. Five? Six? No, it’s too soon. Way too soon.

SHE SAID: They’re smarter now. They know all about that DNA stuff. And it’s been the right amount of time.

HE SAID: Too soon. Way too soon. Do you know how long it took us to invent a vaccine for smallpox? Well, I’ll tell ya. Counting from the day the Universe popped into being until the day they invented the smallpox vaccine, that would be about 14 billion years. And you’re going to tell me that a 12-month-old vaccine is safe? Would you put a 12-month-old baby behind the wheel of a car? No, I didn’t think so.

SHE SAID: You’re not still afraid of needles, are you?

HE SAID: Of course not! By the way, did you notice that this virus all started when the government announced that it’s been investigating UFOs? One day the Pentagon is releasing video footage of “Unidentified Aerial Phenomena,” and the next day we all have the COVID. They say there’s a connection.

HE SAID: People. Smart people. Really smart people. Smarter than you, me, and good old Aunt Edna in El Paso. They say the UFOs probably brought this virus from another galaxy, and that’s one of the reasons why our scientists can’t make up their minds if the virus started at a meat market or in a lab. They say it more than likely started in an alien lab. And this vaccine is some kind of alien concoction meant to sterilize the whole human race so the aliens can have an easy time colonizing our planet since theirs is going to be wiped out by a rogue Black Hole. I can forward you the link to the article where I read it, if you want me to.

HE SAID: Of course not! I’m not that dumb. I followed a link FROM Twitter. It was a very scientific blog. Everybody’s reading it.

SHE SAID: Who is “everybody”?

HE SAID: People who think for themselves. Who aren’t sheep. Who have common sense. Who can add one and two together and get seven different reasons for why we shouldn’t get the shot.

HE SAID: Hey, they sting. Besides that, give me one good reason why I should let some kid with a sharp object, who looks like he’s just graduated from junior high, who’s looking at me like I remind him of the teacher that always sent him to the principal’s office – why should I give someone like that the pleasure of inflicting his adolescent revenge on my innocent body?

SHE SAID. It’s just a vaccination. A little old shot. And it’ll do a lot of good for stopping the spread of the virus in our area.

HE SAID: Have you heard about the side effects? I’ll be the one whose arm will probably fall off – pop right out of its socket and right onto the floor. And they’ll throw it in a bucket of cold milk, hoping to save it so it can be reattached. And when the doctor tries to knit it back on, using the reverse stocking stitch because he’s trying to look fancy, he’ll knit instead of purl, dropping the stitch as well as my arm, again, and I’ll be just out of luck. Too bad, so sad.

SHE SAID: Now you’re just being silly. How ‘bout I go with you tomorrow to get one?

HE SAID: You promise not to laugh if I pass out?

SHE SAID: I promise. 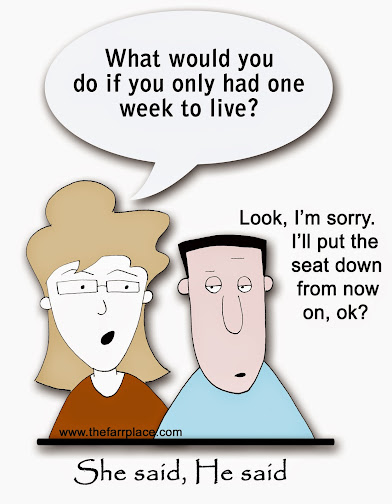 at July 31, 2021
Email ThisBlogThis!Share to TwitterShare to FacebookShare to Pinterest