A chance encounter on the Pacific Coast Highway 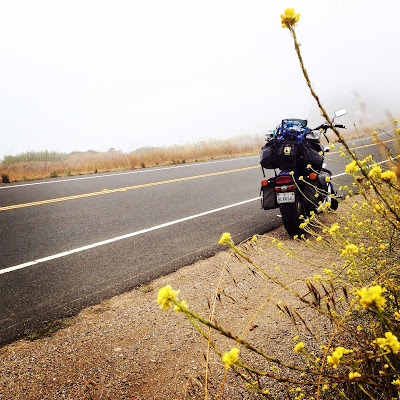 I so much wanted the day to be a good one.

But there was fog everywhere. Fog up the coastline where it rolls in with the waves and surfers; fog down the coastline where it beats upon the rocks disturbing gulls and people trying to do yoga on the beach. Fog in San Clemente, fog in Newport Beach.  Chance people driving the Pacific Coast Highway, peeping out their windows or over handlebars into a sky of fog, thought they were driving on no highway at all, but in clouds with no exit ramps.

The fog didn't come on little cat feet. It muscled its way in like a neighborhood dog looking for food, and decided to stick around until its goal had been met.
"It can't be like this all the way to Portland," I said to myself at a red traffic light in Huntingdon Beach.

And then the universe stepped up to answer, sending me Leonora.

She pulled up right beside me on her motorcycle and asked, "Going on a trip?"

She was probably in her mid 20s. She had on a white helmet, white jacket, sunglasses, chaps, a ponytail. She had a slight Spanish or Italian accent. I didn't take much notice of her motorcycle, other than it had some really nice tan saddlebags.

I told her it would probably take a month, but yes -- all the way on Highway 1.

"Where are you off to?" I asked. (I admit it was a stupid question.)

She shrugged her shoulders and said, "To work."

I nodded my head in what I hope portrayed compassion.

"Is it always foggy like this?" I asked (Another stupid question, but it WAS foggy.)

And then I asked her name, but before I could comprehend what she was saying (her accent got a bit in the way), the light changed and she was off.

I followed her for two more lights then did a partial California lane-splitting move to pull up right beside her.

"What did you say your name was? Spell it."

The light changed, she waved, and then she was gone.

Leonora, I repeated to myself.

Five minutes later the fog cleared and the sun came out.

at September 02, 2020
Email ThisBlogThis!Share to TwitterShare to FacebookShare to Pinterest
Labels: Chasing America